The close up view we often get in Japanese prints, and particularly the way figures are cut off by the edge of the picture, sometimes implies that there is something – or someone – unseen beyond the edge of the print, but perfectly present to the person we are looking at.

There are also visual clues that suggest another presence, and even tell us that we are close to intruding on an amorous situation. Or a lover might be suggested by a reflection, or a shadow on a blind, or by the scent left on a bathrobe. 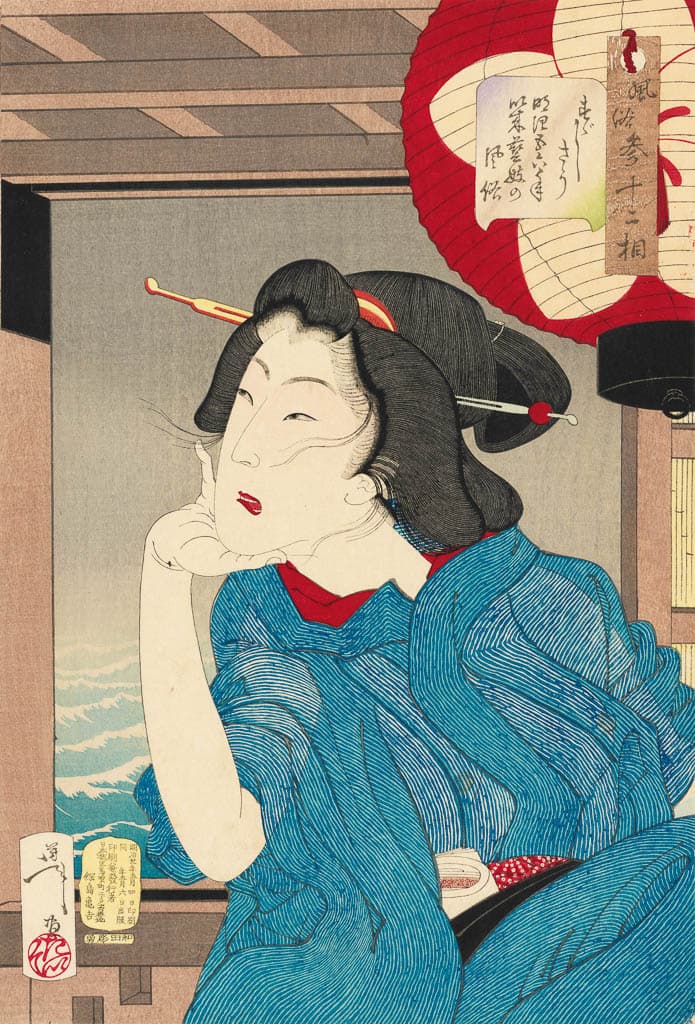 From the series ‘Thirty-two Aspects of Customs and Manners’ (Fûzoku sanjûnisô).

The geisha (‘skilled performer’) is seated in a pleasure boat wearing a robe of silk gauze (ro) through which we can see her body, an effect of virtuoso block carving and design. She is presumably in intimate company, and there is a strong suggestion that she has just had sex in the privacy of the boat. The sensual elements of the image – her erect nipples, the breeze suggested by her stray hair and the waves outside, and the almost tangible touch of air through the gossamer robe – all contribute to the sense of ‘Cool’.

Unlike others in the series, this print is dated to a specific time (1872/3) rather than to a whole era: it may reflect a personal reminiscence of the artist.

As professional entertainers, geisha were traditionally forbidden from having sex with customers, but in the Meiji period lower class geisha were allowed an additional licence permitting them to offer sexual favours as well. Around the date of the setting of this print, the government emancipated geisha from their legal commitment to pay off their indenture. Many retired and became prosperous housewives in the Meiji period. 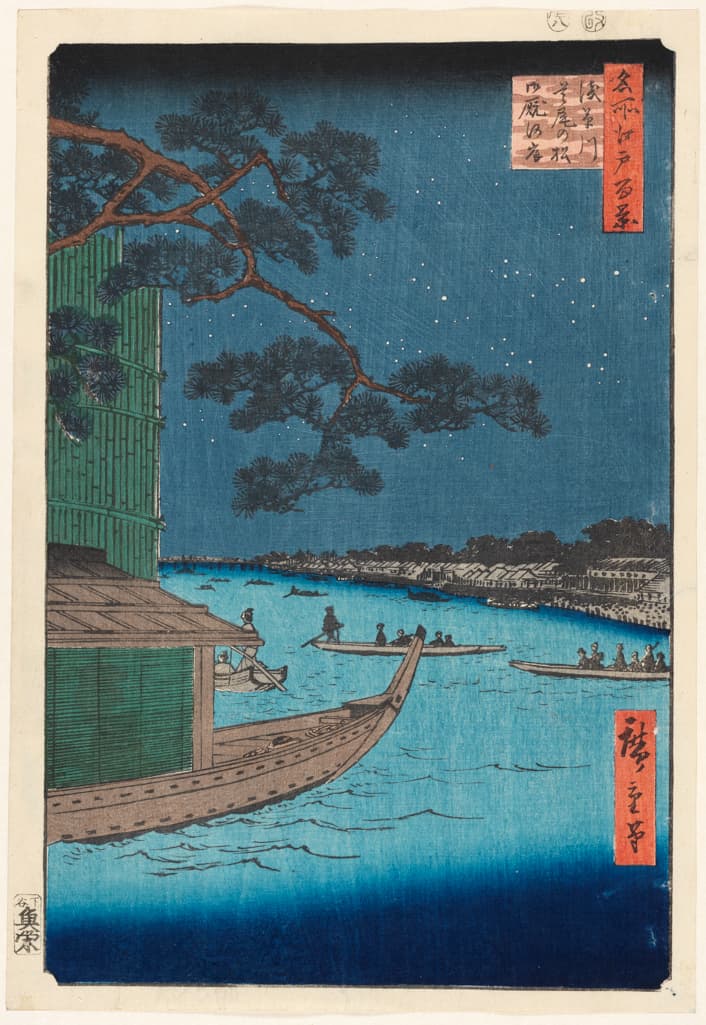 No. 61 in the series ‘One hundred famous views of Edo’ (Meisho Edo hyakkei), in the section for Summer.

Boats from the Oumayagashi Ferry (the landing is just out of sight to the left) are seen crossing the Sumida River at Asakusa. Hanging over the water is the so-called Pine of Success named in the title, which was a landmark for people travelling downriver, especially those headed for the Yoshiwara pleasure quarter.

In the left foreground is a pleasure boat (yanebune). Two pairs of clogs lie in the bow, with the implication that they belong to a pair of lovers who have stepped into the covered section of the boat with the lowered green blinds. We can just make out the silhouette of the woman’s head and shoulders behind the blind. Edicts issued as part of the Tempô reforms in 1842 had actually prohibited lowering the green blinds of yanebune except in wind, rain or snow, presumably to discourage this sort of assignation, which should more properly take place in the official Yoshiwara pleasure quarter.

The effect of the woman’s silhouette is even more subtle in earlier printings than this; they also have a yellow glow in the sky just above the horizon. 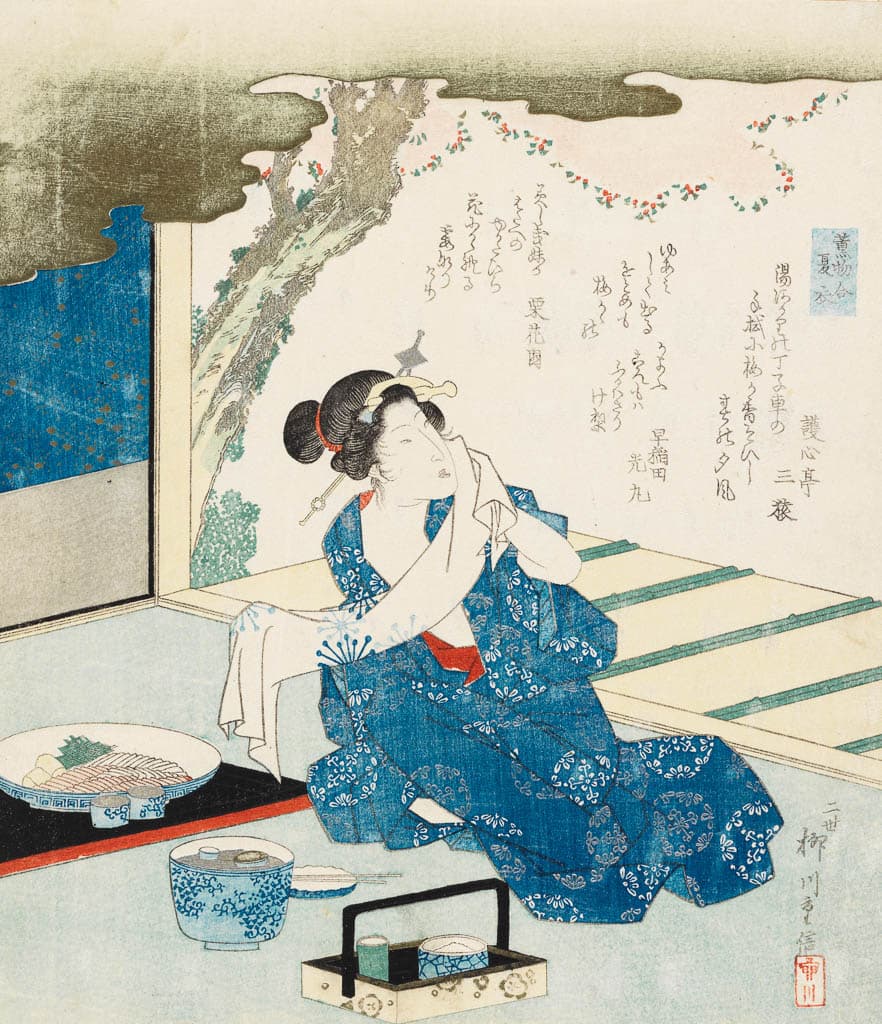 From the series entitled ‘An incense contest’ (Takimono awase). The way of incense (kôdô) was one of the subtlest of arts, in which practitioners were trained to ‘listen’ to blends of incense (kô o kiku) with poetic or evocative or poetic names. This series compares blends that recall favourite aspects of daily life. ‘Summer robes’ alludes to the first day of changing from winter clothes to lighter summer wear.

A woman wears a blue cotton bathrobe (yukata) and dries herself with a hand towel after taking a bath on a warm summer evening. She is about to eat a fish supper, but looks up, perhaps at someone coming in. The loose robe affords a glimpse of naked flesh that confirms the sensual mood of the poems:

The young woman
emerges from the heated bath
and dons a rippling robe
scented with the perfume
of plum blossoms.
– Waseda Mitsumaru

The bathrobe
wraps around the bare skin
of my beautiful love
like a layer of mist
draping the cherry blossoms.
– Rikkaen
(translation: Alfred Haft) 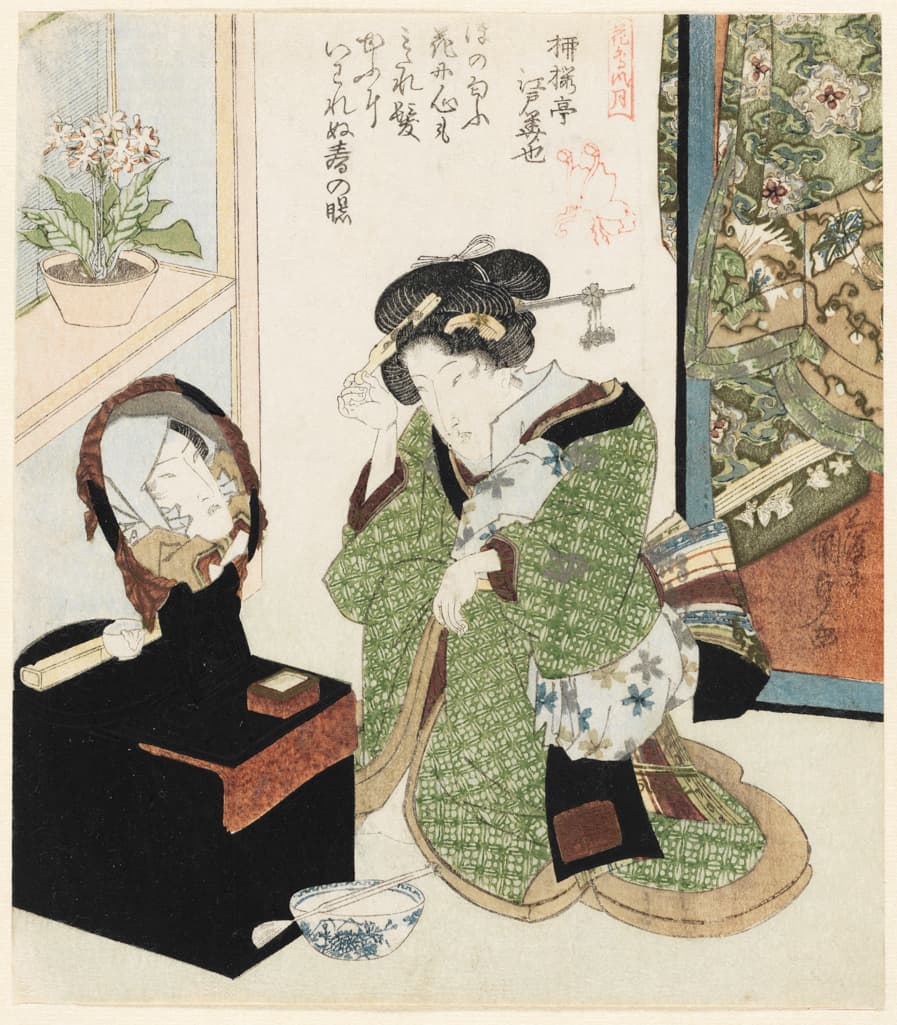 The ‘Flower’ print from a series entitled ‘Flower and Bird, Wind and Moon’ (Kachô-fugetsu).

The poet’s name on this print, Ryûôtei Hanazono Kochô, is one of the pen names of Môri Narimoto, the feudal lord (daimyô) of Chôshu-han, who commissioned the series. The red seal of a butterfly formed from petals and buds of cherry blossom may be associated with Narimoto, particularly as his poetry name Kochô means ‘Butterfly’, but it may be associated with the geisha and other female entertainers who feature on the surimono that he commissioned.

A geisha imagines that she sees the face of a lover in her mirror. His features resemble the Kabuki actor Onoe Kikugorô III, so this may be wishful thinking. On the window sill is a pot of sakura-sô (literally ‘cherry grass’) known in English as Siebold’s primrose.

The subtle fragrance
of flowers creates
emotions that get entangled
just like hair, so hard to arrange
in an indescribable spring dawn.
– Ryûôtei Hanazono Kochô
(based on a translation by John T. Carpenter)